This article was originally published by the UCLA Newsroom

UCLA will create the new Simons Mathematical NanoSystems Initiative, in part with support from the Simons Foundation’s Math+X Investigator award to mathematics professor Andrea Bertozzi and from the California NanoSystems Institute at UCLA. Bertozzi is UCLA’s director of applied mathematics, holds UCLA’s Betsy Wood Knapp Chair for Innovation and Creativity and is a member of CNSI.

The initiative will focus on two areas of research: understanding science at the nanoscale through advances in imaging and sensing technology, and, secondly, the development of micro-scale microfluidic engineering and device design.

Bertozzi said she is thrilled to receive the Math+X award, which provides $1.5 million over five years starting July 1. “Government funding agencies have missed the opportunity to provide sustained support of mathematics applied to nanoscale applications, whereas UCLA has a world-class nanosystems institute with so many interesting problems and opportunities for developing new mathematical models and algorithms,” she said. 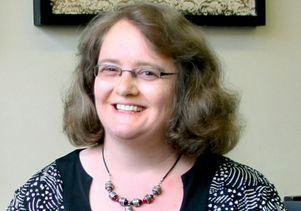 This award builds on prior successes — such as a $1 million Keck Foundation grant awarded in 2013 to a team of UCLA scientists — led by Paul Weiss, who holds a UC presidential chair and is a UCLA distinguished professor of chemistry and biochemistry, with Bertozzi as one of three co-principal investigators. They studied how images and large data sets are collected and analyzed in science, engineering, medicine and other fields. An example of research from that team was published in ACS Nano last year on mapping buried hydrogen bonding networks.

Bertozzi has also worked with UCLA mechanical engineering professor C. J. Kim on the modeling of his EWOD microfluidics device and has developed “non-raster scanning methods for atomic force microscopy” in collaboration with Paul Ashby of the Lawrence Berkeley National Laboratory’s Molecular Foundry. The raster scan, Bertozzi explained, goes back and forth like a lawn mower, scanning a sample along straight lines sequentially in a row; the non-raster scans use a spiral pattern and can scan a surface in a fraction of the time needed for the raster scan. Advanced mathematics is required to figure out the best path for the spiral and to re-compute data as if it were on a raster, so that information is organized like a digitized photo on a grid.

In addition to continuing her research on nanoscale imaging, Bertozzi plans to develop mathematical theories for behavior of complex fluids in microfluidic geometries in which the physics might also be balanced with thermal effects, surface tension effects, contact line dynamics, magnetic forces and other physics relevant to small devices that could have many useful applications.